Now absolute magnitude might be the one that you don’t see why it matters to you, as absolute magnitude (brightness) is the magnitude of a star as it would appear to a hypothetical observer at a distance of 10 parsecs or 32.6 light-years.
You may have heard the term parsecs in the original “Star Wars” movie, the bar scene, where Han Solo is showing Obi-Wan Kenobi his starship, trying to convince the Jedi of its speed.  Hans says, “You’ve never heard of the Millennium Falcon?  It’s the ship that made the Kessel Run in less than twelve parsecs.”
That sounds awfully fast, doesn’t it?  But the parsec (like the light year) is a unit of distance, NOT time.   A parsec is equivalent to about 19 trillion miles or 3.26 light-years.   I apologize for them for confusing you.
Analogy:  Here’s another daily confusing example of where units are misused.  When you buy carpeting or flooring you pay for it by the yard, but we are talking about a two-dimension area and a yard is a one-dimension unit.   I figure that since these professions work with their product of area for a living, they just take for granted that you realize that it is a square yard so just leave the word square off, to save time.
This is the same mistake with volume occupations (like when you order a truck load of dirt or cement) as you order them and pay for them by the yard when again, the people who do this for a living think that you automatically know that volume is three-dimensional so their yard is actually referring to a cubic yard (a volume that has the dimensions of the length of a yard, the width of a yard, and the height of a yard; is commonly referred to as a cubic yard.)  Since these professions work in volume daily, to save time, they just refer to the amount they are selling you as a yard.
So, a light-year and a parsec, even though they contain units of time in them are both units of distance so when they are misused as units of time, I can see why it would confuse people.
2.  Give an example of how Absolute Magnitude is used.
Have you ever heard the expression: “You are comparing apples to oranges but you need to compare apples to apples in this problem?”
Well, when Astronomers who study Stars want to compare Stars in a fair way, they want to know what happens if each of those stars were placed at the same distance from Earth.   Because there exist super red giant stars that if you placed them at the distance of our Sun from the Earth (one astronomical unit or 1 AU) these super red giants would engulf our entire solar system (true, all our planets would end up within the diameter of these stars).  Thus when Astronomers choose a distance to place all the stars at, they choose the very large distance of 10 parsecs; where 1 parsec is 3.26 light years.
One example showing using absolute magnitude is:
​ 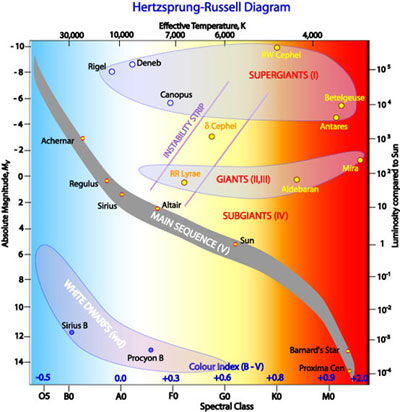 The above graphs are commonly referred to as HR Diagrams as the two Astronomers Hertzsprung and Russell discovered a pattern when they graphed stars by their color (Spectral Class) and Absolute Magnitude.  The graphs above show the results of graphing lots of stars and where they ended up on the graph.   When I taught Astronomy, I had my 300 students each graph a hundred stars this way by giving them the Spectral Class and Absolute Magnitude of a hundred stars.   All the students really enjoyed this activity as one of the stars they plotted was our sun on the graph and several dozen of the other stars they had learned the names and meanings of and they knew how to locate them in the night sky.  Do you recognize the names of any of the above stars?   Isn’t it cool to see where the star you know is on the HR diagram?
The surface temperature is also called the Spectral Class and the Spectral Classes are O, B, A, F, G, K, M from left to right in the HR diagram on the horizontal axis.   A way of remembering the Spectral Class letters is:  “Oh, Be A Fine Girl (or Guy if you prefer), Kiss, Me.   The O & B stars would be shades of Blue (the hottest ones), A’s white, F & G are shades of yellow, K’s orange in color and M’s are red.
Example of a star classification:  Our Sun is classified as a G2 V star, with G2 standing for the second hottest stars of the yellow G class and the V representing that it is on the main sequence of the HR diagram.
​
Note:  This is as far as I had time for this morning but I'll add some more great star information soon.