This maybe one of your favorite activities and you students can help you with making the puzzles, which you may have for life or let your students take them IF you wish to make the puzzles every year.   If you are a home school teacher or a parent with kids who love to learn; all with learn lots with this activity,
Purpose:   By doing this activity, you and your students will learn (in a fun way) that constellations ARE NOT groups of stars that make up shapes of animals/objects/whatever but instead are regions of the heavens that pass over you everyday and just like continents/countries/states/counties have given shapes.   Constellations (regions) of the sky have given shapes also.
Data Facts:  There are 88 constellations (and 88 keys on a piano keyboard) but it depends on you latitude on Earth, how many of the 88 regions you see all the time, some of the time, or none of the time.
North Pole:   If you lived at the North Pole, you'd only see (the Northern Hemisphere objects) the night sky regions north of the celestial equator (an extension of Earth's equator to the sky.  AND the north half objects would be visible all the time (if it was dark enough to see them) and there would be no sometime stars and the never stars and objects would be all the objects north of the celestial sphere.
South Pole:  And similar for the South Pole, as if you lived at the South Celestial Pole (the Southern Hemisphere objects) you'd only see the objects south of the celestial equator.  AND the south half objects would be visible all the time (if it were dark enough), meaning they never set; and there would be no sometime stars and the north stars would be the never stars and objects.
Equator:   If you lived on the Equator though; you'd actually get to see all 88 of the constellations, throughout the year.
However, all the stars and objects would be sometime objects and none of the objects would be all the time or sometime objects.
Any other latitude beside the North Pole, South Pole, or Equator:  This is the group that most of us live in so this is the puzzles that I'd make first.   At (lets say 45 degree north latitude, as that is where I use to live) you'd see the top quarter of the sky all the time, the bottom quarter of the sky, never; and the middle 90 degrees sometimes throughout the year.  Or lets say you live at a 30.2 degree latitude north, as that's where I live now) because now you'd only see 30.2 degrees of the top all the time; 30.2 degrees from the south pole never; and the remaining 180 - 60.4 = 119.6 degrees of the objects sometimes (as the sun makes the sky to bright to see them all year).
Decide Which Puzzle You'd like to make first.
The first thing you need to decide is which puzzle(s) you'd like to make first.   When I was a teacher of Astronomy, I made both a North Pole latitude puzzle and a South Pole latitude puzzle as then we'd use all 88 constellations between the two puzzles.   Or, if you make Equator latitude puzzles, you'd still have to make two puzzles by setting the date to be Summer for 1 puzzle and Winter for the 2nd puzzle to get all the constellations (or Spring & Fall would get all 88 constellations also.)
When done with either pair of puzzles above, you could make two for just your latitude (one for Winter and one for Summer OR one for spring and one for fall OR make one for each season?)

Directions to make puzzle:
(by the way, you cannot buy these puzzles anywhere online so if you'd like to get rich fast, start a company that makes these puzzles and they'll sell like hot cakes but you'll have to be first.) 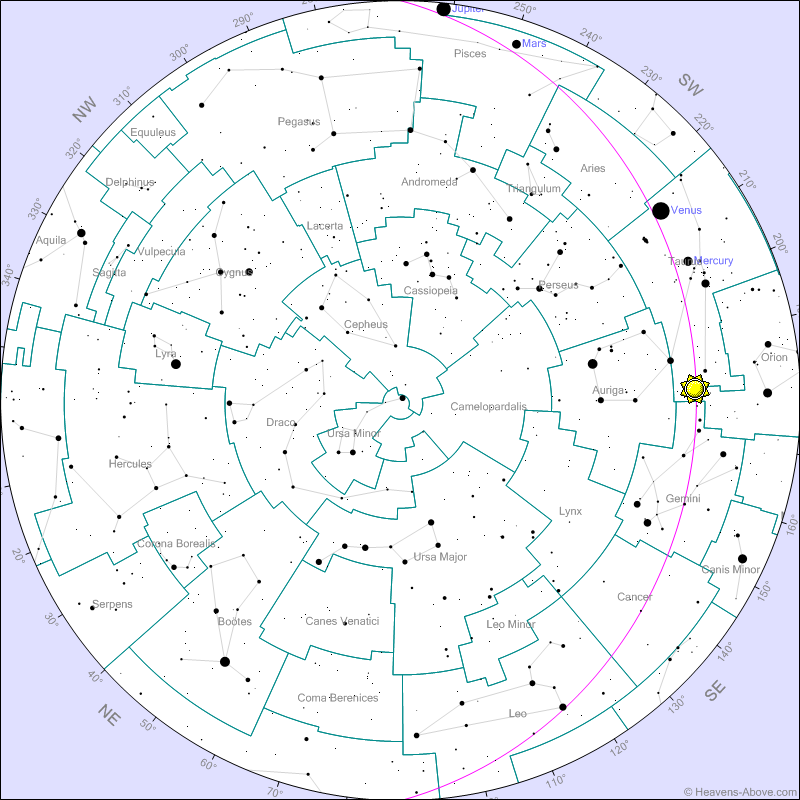 Now you have your Northern Hemisphere Constellation Puzzle with the actual boundaries of each constellation.  Note Orion's belt is right on the celestial equator so you only have the top half of Orion but when you do the South Pole puzzle, you'll get the bottom half of Orion and all the rest of the 88 constellations.
Note that the red line is the ecliptic (or the path the Sun appears to follow through the sky from Spring through Summer to Fall.   The South Pole puzzle will give you the ecliptic from Fall through Winter to Spring.
I will go back and change the size to 1600 to enlarge the puzzle and then use ctrl prt sc to copy the left upper half and paste it in a Word Document with minimum margins and then move the puzzle to the middle left section, and crt prt sc to copy and paste that to the next page in your Word document, then the lower left half, followed by the upper right corner, the center right side and finally the lower right side copied with ctrl prt sc keys and pasted to the 6th page of your Word Document.   These larger puzzle pieces are easier to cut and easier to print your own constellation names (if missing or too light to see) on each piece of the puzzle.
I also had a copy machine at school that allowed stiffer paper to be copied to) or if you don't have a copy machine you can glue to construction paper or wood to make even more durable puzzle pieces.  The hard part is finding all the shapes of all 88 constellations so they fit together perfectly as after hours of searching, this is the only way I could find to get a puzzle like this accomplished.
This is where your students (children, helpers) can help you cut all the pieces out to finish the puzzle.  I kept each of my puzzles in a manila envelope and also put a copy of a smaller key in each envelope (in case they needed to photo like everyone does with a normal 1000 piece puzzle.
Important:  Instead of cutting out each constellation right away, I found that printing the largest pieces possible and lining them up to get the whole puzzle as one piece, then attaching the whole paper puzzle to your stiffer backing, and only then cutting out the individual constellations is the way to go.   With the size of the puzzle set at the maximum of 1600, I was able to get six large sections that I assembled perfectly to make one large puzzle (I did a crtl prt sc with the upper left, middle left, lower left, lower right, middle right, and upper right; before arranging these six pieces perfectly, to get my one large puzzle glued to the poster board and then cut out all my puzzle pieces.  To get the 2nd puzzle (for my wife's birthplace, date of birth and time of day of birth) I changed the location by keeping the same latitude but subtracted the longitude from 180 degrees so the place of her birth 43.0350 N, 87.9225 W for the 1st puzzle became 43.0350 N, 92.0775 (180 - 87.9225) E.  Then I used Google Earth and discovered her 2nd map was as the heavens looked in Turpan, China at the time of her birth and has population about 50,000 people more than Milwaukee where she was born; even though it is the second lowest place (below sea level) on Earth and the hottest place to live in China (much worse than the hottest place in the United States).

Follow the same steps above again only in the search either type in 0 for latitude and 0 for longitude and update OR search for Nairobi (-1.2833 latitude) or Singapore (1.3571 latitude) if you'd like to be in an actual city.  If you don't search for any place when you first go into heavens-above.com, the software automatically places you at 0 degrees latitude and 0 degrees longitude, so you could start with these puzzles.
To get all 88 constellations, you'll have to do two dates that are exactly 6 months apart.   I did Dec 20th any year and June 20th any year for my two equatorial puzzles.

Your location on this planet, puzzles.

Same as the Equatorial Puzzles above only search for your address or observing location but again print out two puzzles six months apart to obtain all 88 constellations.

My Astronomy class was a contract grade system so each student needed 1500 points each quarter for an A grade, 1400 for an A- grade, 1300 for a B+ grade, 1200 for a B, 1100 for a B-, 1000 for a C+, 900 for a C, 800 for a C-, 700 for a D+, 600 for a D, and at least 500 points for a D- as under 500 pts for each quarter was an F grade.
So, when I did this activity, I awarded 50 points each to the group that solved the puzzle first, 25 points if they solved the puzzle within 40 minutes (as they need the remainder of the period to clean up), and 10 points if they tried until the time was up.  I also gave them 10 minutes the day before, at the end of the class, to group up and start a puzzle for 5 minutes so they could think about it overnight and then learn to clean up properly.   The students had already learned the Northern Constellations so the winning team each period solved the puzzle in less than 15 minutes usually.  The Southern Hemisphere took longer as they had not learned them.

Puzzles for that special someone's birthday

My plan is to make this puzzle for my wife first and then make one for each family member (we'll have 98 people in our family before this year, 2022, is over) but I may have the parent make the puzzle for their own children or the have the family member make the puzzle for their own spouse after I make one for them as for me to make all the puzzles for 98 people; I don't know if I'll live that long.
I've recently made a special constellation puzzle for my wife's birthday and found that printing the six large pieces of each puzzle first and taping them together so each of the entire puzzles are done and then attaching the completed puzzle to your more rigid backing before even starting to cut out each piece; is the way to go.  For the second puzzle for my wife's place of birth, date & time of birth (from her birth certificate); I kept the same latitude of her birthplace but subtracted the longitude from 180 degrees (thus 43.03050 N latitude and 87.9225 W longitude became 43.03050 N latitude and 92.0775 E longitude at the same exact date and time of her birth so that the sun, moon, planets on the back side of Earth, at the exact time of her birth, made her 2nd puzzle.   Her parents would have that near exact sky 12 hours later.
Click here for how to make the special constellation puzzles for the special person in your life.