These photos were taken by holding a cell phone up to the eyepiece of the 12" reflecting telescope.   It is not an easy way to get photos.
Three Lunar Eclipse Photos taken May 15th, 2022 outside my home, in Headwaters Subdivision, Dripping Springs, TX.
One the left is the Moon coming out of the shadow of the Earth, middle photo shows two stars near Moon as normally the Moon washes out all stars anywhere near it (like our Sun does during the day), and the photo on the right shows one star coming out of occultation by our Moon.   All photos were flipped 180° by me, to return them to natural, as the telescope always flips images 180°.  The lower left side of the Moon came out of Earth's shadow the same way it originally went into Earth's shadow to start the total lunar eclipse.
Our next total lunar eclipse will be March 14, 2025 (at 7 am) but we have a historic total solar on April 8th, 2024 (6:18 pm) which will bring thousands to our Austin Area to witness from all over the world.
Last night was the best total lunar eclipse (I've ever witnessed) because the Moon was nearest Earth in it's orbit and happened at an hour that even children could witness it's totally before going to bed on a Sunday night with school the next day. 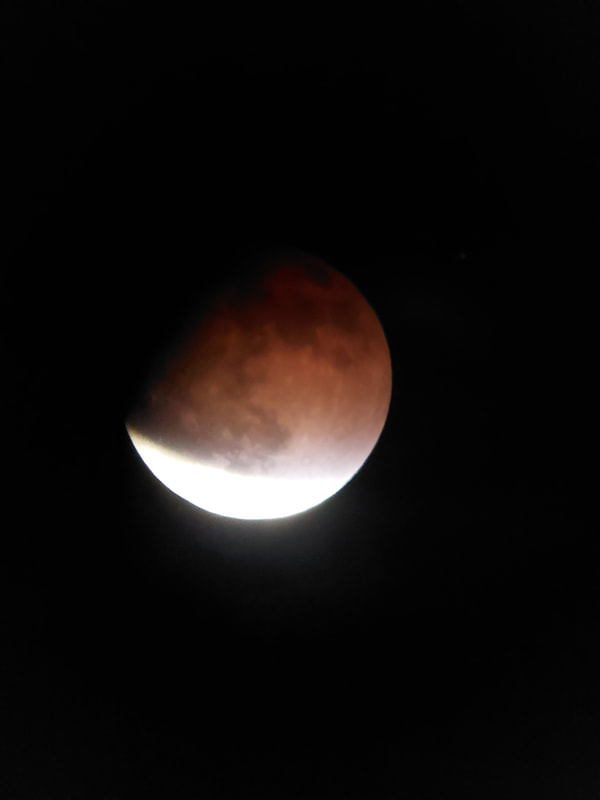 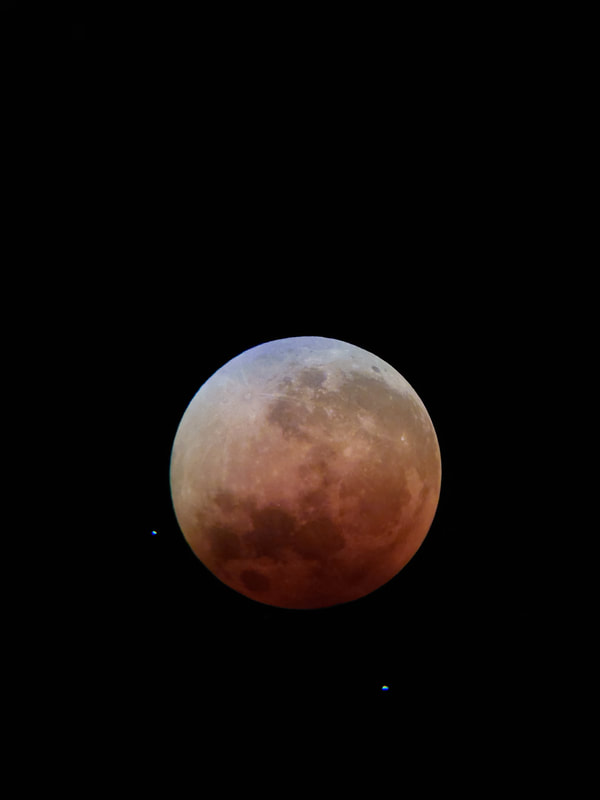 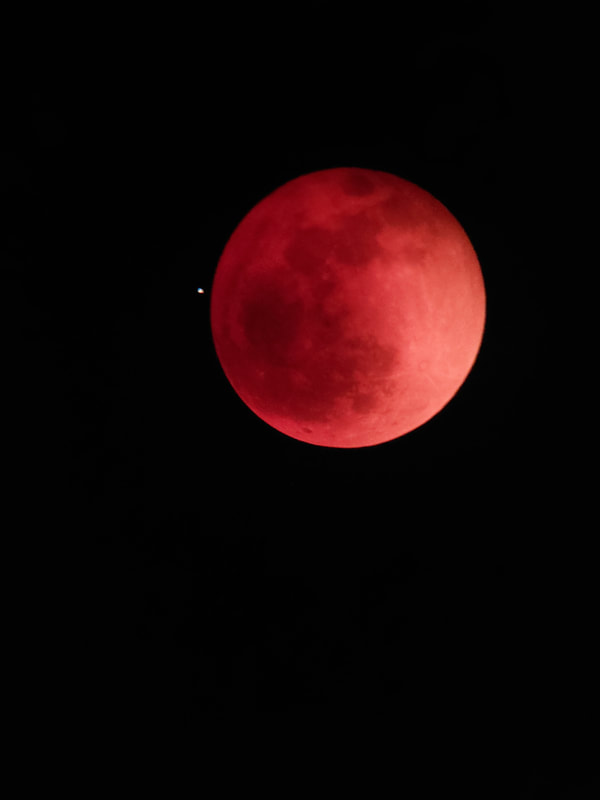 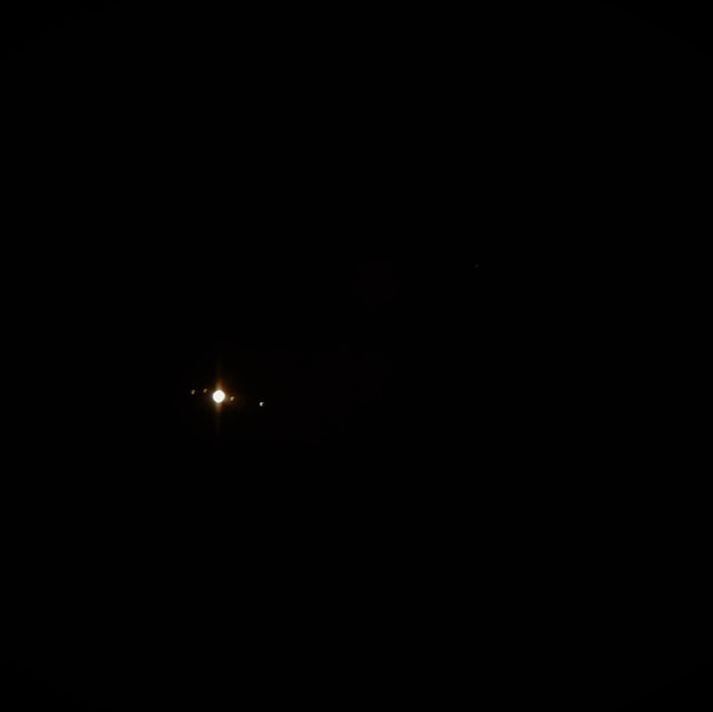 Those star looking shapes on either side of Jupiter are the four Galilean Moons of Jupiter.
The Galilean Moons order from closest to furthest are Io, Europa, Ganymede, and Callisto but because they rotate around Jupiter, the furthest moon can be positioned in front or behind Jupiter appearing closer than Io.
This morning the Galilean Moons order are:   On the far left is Europa then Callisto and on the right side nearest Jupiter are Io and furthest right is Ganymede.
Ganymede has a radius of 1,635 miles, where the radius of planet Mercury is 1,516 miles, thus making Ganymede larger than planet Mercury and actually the largest moon in our solar system.   Our moon's radius is 1,079.6 miles and Earth's radius is 3,963 miles.
Europa is known to have an ocean of liquid water under Europa's ice and there are large cracks in the ice that may allow small robots to access the water and check for life in the water someday.
Io, being closest to giant planet Jupiter, has volcanoes erupting every time we've taken photos of Io.   Io is the most volcanic body in our solar system.
Ani & I could make out belts on Jupiter this morning with our naked eye.  Since Jupiter is a gas planet the surface does not rotate as a whole but instead the equator's belt (segment) rotates over 1,000 mph faster than the belts on either side of the equator belt.   The belt looks similar to zebra stripes and when you see the darker belts, you are looking deeper into the atmosphere of Jupiter.

Saturn and Saturn's largest moon Titan (seen in the upper right of Saturn). 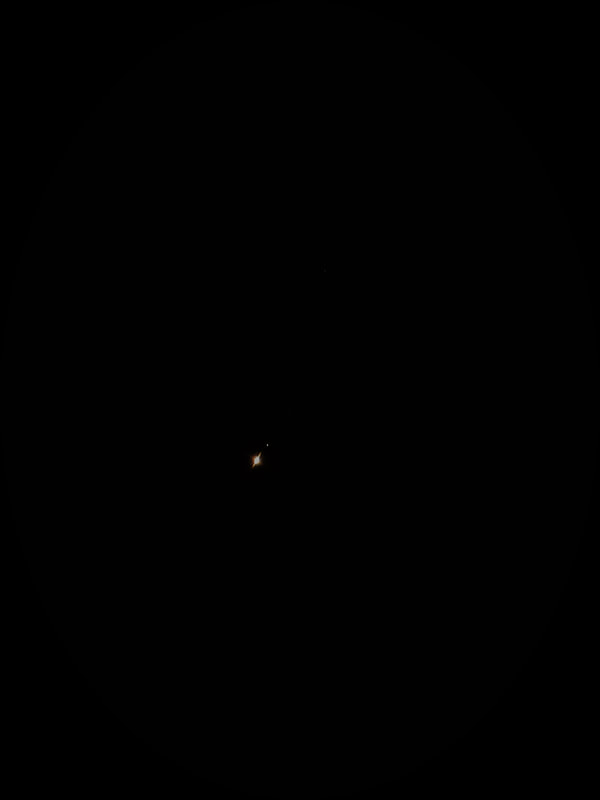 Venus with the 15th brightest star of Pisces called Opiscium Piscium (under Venus). 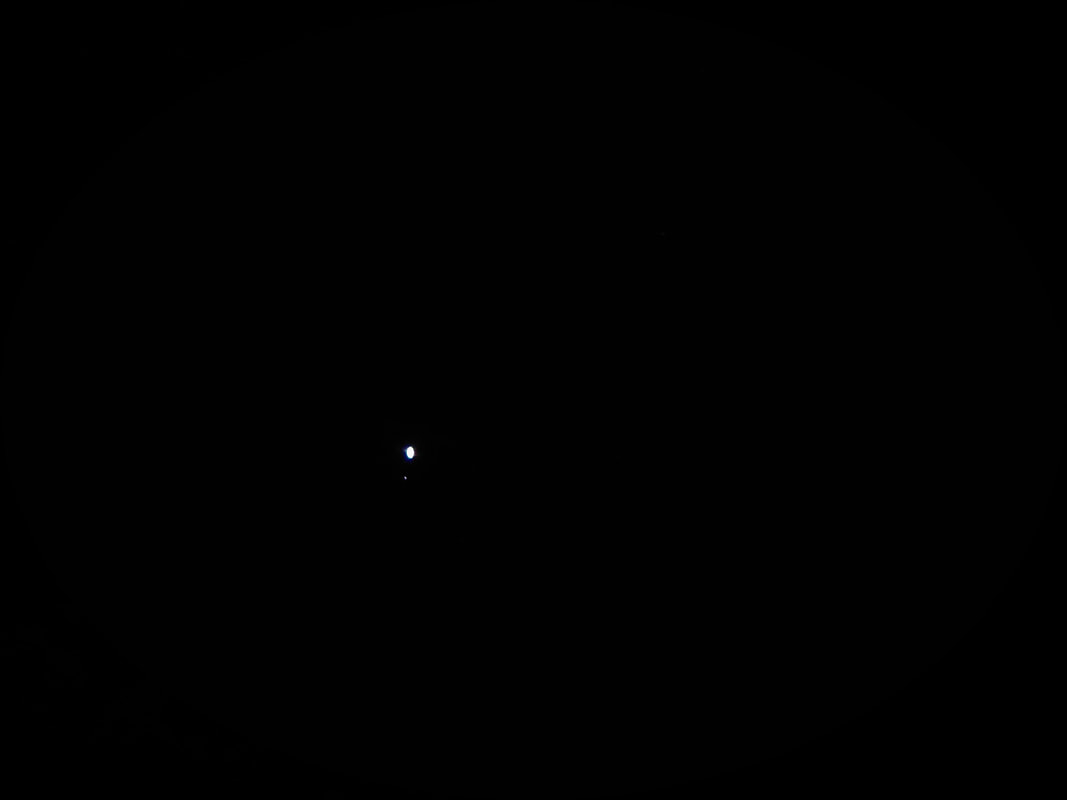 Note the image of Venus below, shows the phase Venus is in above, as seen through the telescope on 5/28/22.
It's cool that Venus goes through phases (like our moon) and is the only planet to do so in our solar system.
Venus always has clouds that are made purely of the very corrosive sulfuric acid, has a constant temperature of about 900 degrees Fahrenheit, has 90 times the surface pressure of Earth because of the greatest greenhouse effect on the solar system.   Next to the Sun and the Moon, Venus is the 3rd brightest object in our night sky. 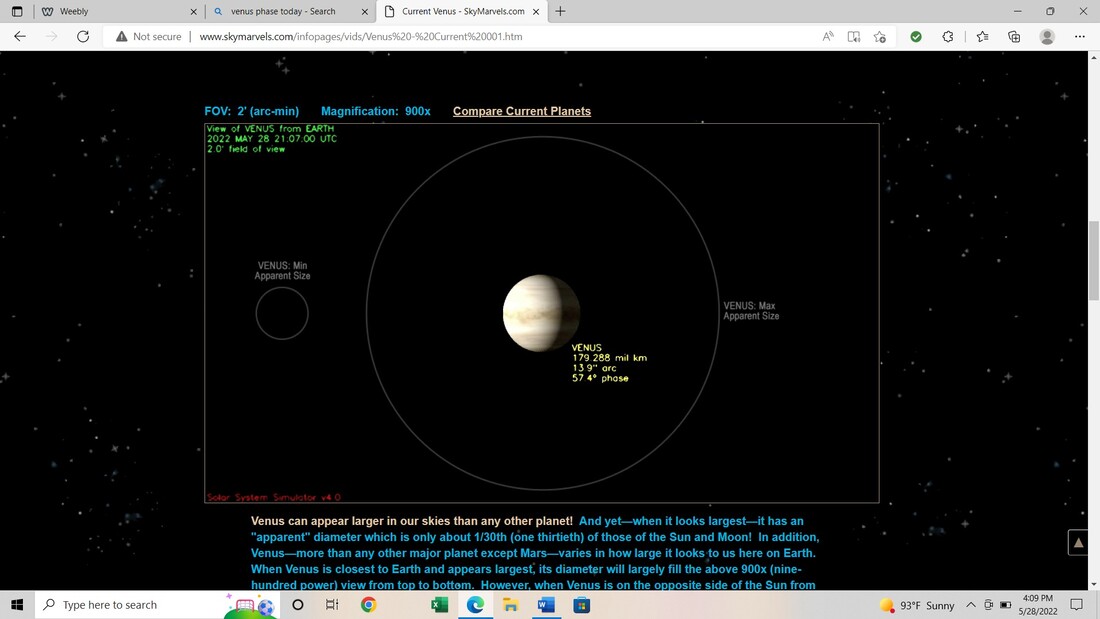 Mars & Jupiter were in the finder scope simultaneously this morning.   Tomorrow morning, Jupiter & Mars will be at their closest, only a half degree apart (note: the Moon & Sun each take up a half degree in the sky).
​According to NASA, a one-way trip to Mars would take about nine months. If you wanted to make it a round-trip, all in all, it would take about 21 months (9 months to get to Mars, 3 months on Mars, and 8 months return trip) as you will need to wait about three months on Mars to make sure Earth and Mars are in a suitable location to make the trip back home.   Currently, the longest a person has spent in space is 370 days.
The surface pressures on Mars are less than 1% of Earth's surface pressure, thus like being on a 100,000-foot mountain where Mount Everest is 29,035 only feet.   The average temperature on Mars is -81 degrees F, but that's a little misleading as the poles in the winter get to -220 degrees but lower latitudes, nearer the equator, in the summer, may reach 70 degrees.  As far as we can tell currently, Mars surface is rather desert like.
My thoughts:  I believe that the movie Total Recall was not far off from accurate, as if humans could pressurize caves underground on Mars, the temperature of caves remain constant here on Earth and caves would allow you to miss the windstorms on Mars.   Our sun will grow in size, in the far future, until Earth is within the sun's radius, so at that time Mars should be warmer and the closest place to live.   When Mars gets too hot because of the Sun growing in size, Europa may be the next place humans may have to reside.  Currently, humans going to Mars would be a suicide mission, but we need to continue working the problems as we will need to go to Mars someday in the far future. 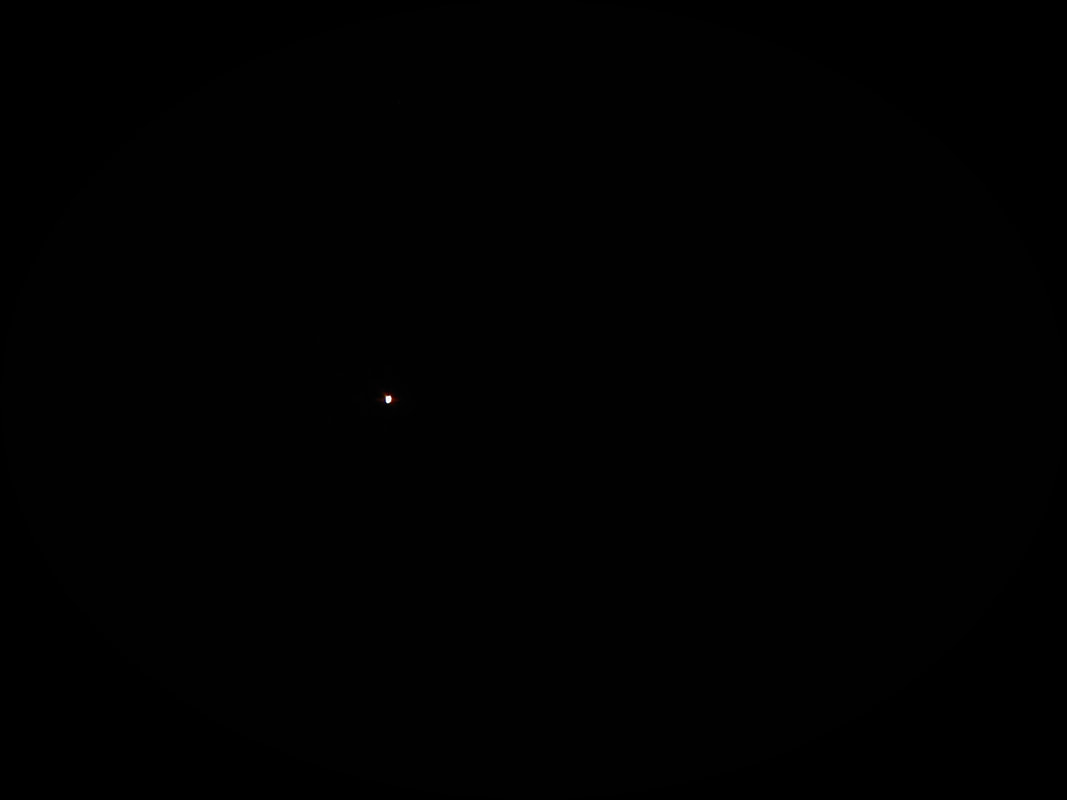 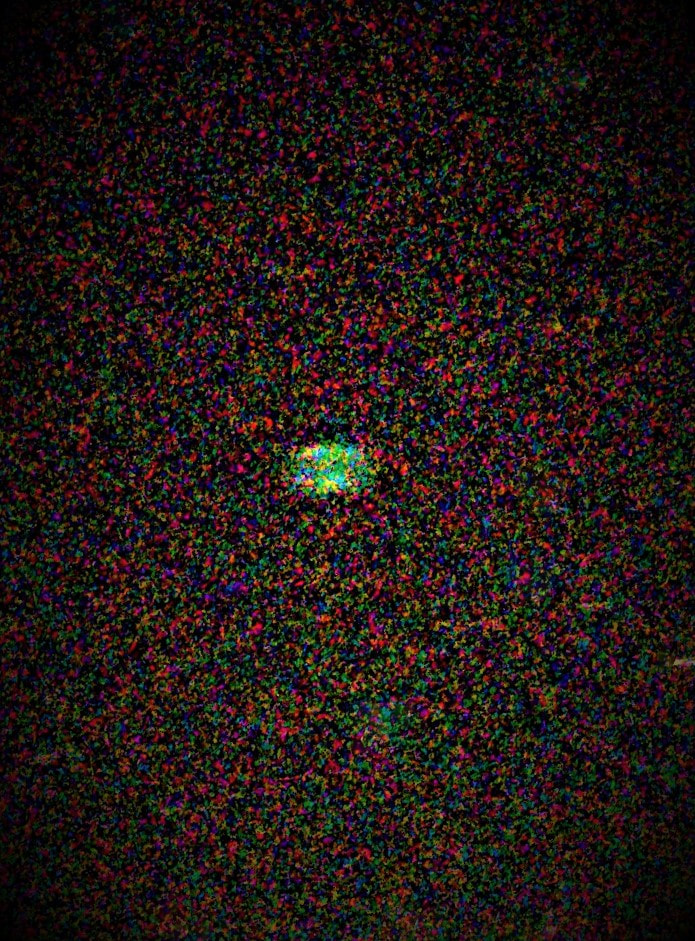 The Ring Nebula looks like a smoke ring that people that smoke cigars can do but is actually a star that blew off it's outer atmosphere.   This cell phone picture is not doing it justice as it looked more like a smoke ring when looking through the eyepiece of the 12" reflecting telescope that morning of May 28, 2022.

Below a Nebulosity & multi-star cluster in Scorpious 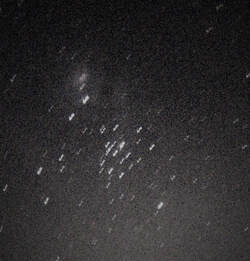 All these streaks were individual stars in a cluster and the 2nd dim one above the brightest top middle streak was a nebula, where hundreds or even thousands of stars will be born over time.
A cool activity to do with the 12" telescope, is to just randomly move the scope through the night sky very slowly, as it's impossible to not hit stars not visible to the naked eye where-ever you point the telescope and if in the Milky Way patch, the milkiness will miraculously change into individual stars as your eyes dilate to the darkness.  This photo comes from doing just that, in the region of the night sky called Scorpius (the Scorpion).  Here in HW, with a latitude of 30.2 degrees north, we can see the entire region, but in central Wisconsin, latitude 44.5 degrees north, we could only see the east third and the top of the hook in the west as the middle third stayed below the southern horizon.