Why do I see the moon and planets, sometimes before dawn and other times after sunset?

Quick Explanation using Kinesthetics:
1.  Choose an object in the distance to represent the Sun.
2. Now pretend that your head is the Earth.
3. As you are looking at the object you choose to represent the Sun (note:  never look at the real Sun as it will hurt your eyesight!!!) imagine a line passing through both you and the Sun and extending out forever in both directions.
4.  Now, as the Earth, let's say your eyes are where you currently are on the Earth and the back of your head represents the far side of the Earth, and you cannot turn you head at all but have to stand as straight as a shoulder and turn you whole body with your head, as you spin on your axis, 360 degrees per day.  Note, the Earth always spins toward the East (that's why the Sun appears to rise in the East and set in the west) so spin toward left shoulder when you are asked to spin on your axis.
5.  Have your body face midnight.   Yes, your back would be facing the Sun and your eyes would be directly looking away from the Sun and you could see any object at midnight (like the moon, all planets except Mercury and Venus and if it's your half birthday (six months after your birthday), your zodiac constellation.
6.  Now turn to dawn, at 6 am.  Yes, your left shoulder would be facing the Sun's side of you and you would be seeing any object (moon, planets, stars) that lie to the right of the line through the Earth & Sun.  If a line through the object and your face (your side of the Earth) makes a perpendicular with the Sun/Earth line then the object would be directly overhead at your 6 am position.  If that line makes an acute angle with the Sun/Earth line then the object is to your left; and if an obtuse angle, the object is to your right.
7.  Now turn to noon (standard time).   Yes, your eyes are facing the Sun directly and you cannot see any sky objects as the Sun is way to bright (the ultimate light pollution) and you never look directly at the Sun as it will diminish your eyesight.
8.   Now turn to 6 pm, dusk.   Yes, your right shoulder faces the sun.   Again, if a line going through the object in space and you makes an acute angle with your Sun/Earth line the object will be to your right.  If a right angle, the object is straight up (or out from you).  If an obtuse angle, then the object is to your left side.
Story 1:   One evening, I was waiting for my son as he finished soccer practice and I noticed a very crescent moon set just before the sunset, that evening.  I thought nothing of it at the time, but the next morning, on the way to work I notice a very crescent moon rise just before the sun did.   I thought to myself, how could this be as I saw the moon set before the sun and then 12 hours later I saw the same moon rise before the sun did?
Well, both the moon and the sun take up half a degree in space (you can have the moon exactly cover up the sun, on a total solar eclipse) and the moon moves it's diameter per hour east (the same way the earth spins) so in 12 hours the moon would have moved 6 degrees, thus if the moon set 3 degrees or 12 minutes before the sun set last night the moon would have past the half of the degree (under or over the Sun most of the time) of the sun (so now we are at 3.5 degrees) and rise 2.5 degrees before the Sun (since there are 4 minutes per degree because of the spin of the Earth) so (2.5 times 4) or 10 minutes before sunrise.
[Note:  if the times did not make sense, go to the Astronomy section and watch the first of the 5 Must See Videos.]
​
Story 2:  All the planets orbit the sun with Mercury orbiting the Sun the closest so Mercury cuts between the Sun and Earth and then behind the sun just to reappear again.   Mercury is hard to see, but possible, as it can never be more than 27.8 degrees away from the sun.
Venus is the 2nd planet out from the sun and Venus's maximum angular separation from the sun is 47 degrees 8 minutes.  So, if someone points at a bright object 50 degrees or more away from the sunset and says, "Oh look, there is Venus."  you know that it is not possible.
However, all the rest of the planets orbits are further outside our Earths orbit so only those planets can ever be seen directly away from the sun, in the sky.
Story 3:  When I first setup my Astronomy classroom, the week before school started, I noticed that in my favorite Astronomy website:  heavens-above.com  that they had an Astronomy category called: Solar System Chart
​Below is a copy of the chart for today:  04/13/2022 at 9:45 am; time zone:  CST and DST in effect.  Cont. below... 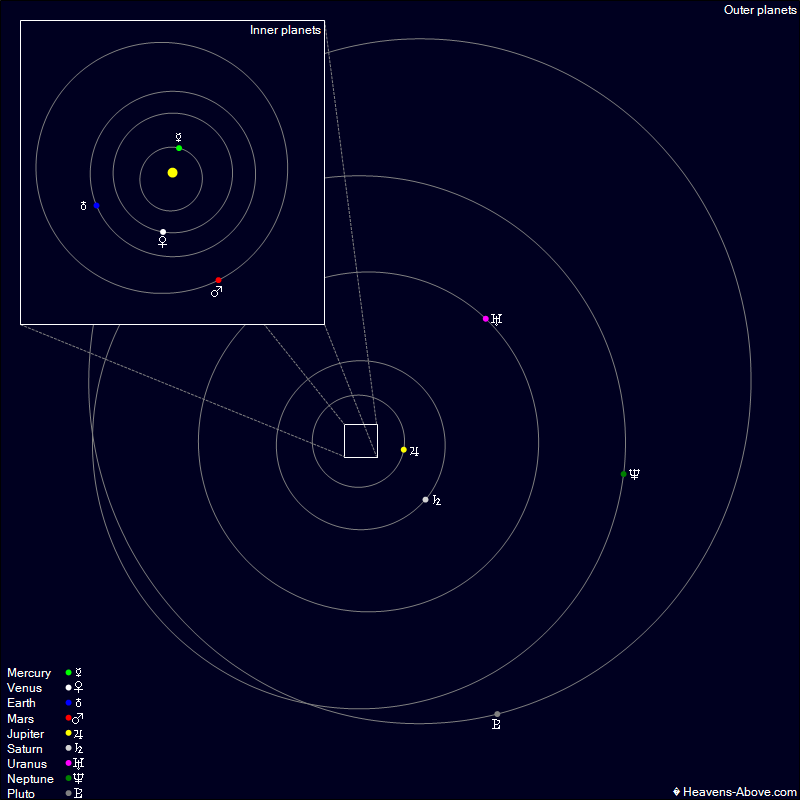 Note that the square in the upper left has the fastest moving planets (Mercury, Venus, Earth, and Mars) with their current positions in the solar system, in relation to each other; and the larger area, with the little square in the center, has the outer planets (Jupiter, Saturn, Uranus, Neptune and Pluto [a dwarf planet now]).
What I did in my classroom is I made a large paper Mache yellow sun and huge it from the center of the classroom and used a large protractor to draw spokes (lines on the ceiling tile) out, every 5 degrees; with 0 degrees being due North, 90 being due East, 180 being due south, and 270 being due east.   Then I printed the above solar system out and measured with a protractor the degrees the above planets made with a horizontal and vertical scale through the sun above.   I actually had wire orbits for the interior planets so I could just glide them around their wire orbits easily but the outer planets only had to be moved at the beginning of the semester and the end of the semester as the outer planets take a long time to orbit the sun.   I also had the paper mache outer planets to scale by size but the classroom was not near big enough to have their distances by scale (their distances by scale is the next story, but I'll place that story under activities).
As all the planets hung from the ceiling in their correct places, in our solar systems, I could stand under planet Earth and spin slowly, as students could easily see noon being when I faced the sun, 6 pm as I turned 90 degrees with my right shoulder facing the sun (turning east under an actual little earth globe that I had and could scale all the other planets compared to my little toy earth globe with the countries on it.   And when my back was to the sun, it was midnight; then spinning 90 degrees more was 6 am before sunrise as I spun till noon again.
The big picture idea though as all the students could see as I spun under planet earth, they could easily see the other planets hanging around the sun and whether we'd see those planets in the early evening as I spun to 6 pm and midnight and looked at those planets hanging from the ceiling, directly overhead at midnight if my back was to the sun and the outer planet was visible straight ahead for me or if I'd see them after midnight in the morning as I spun to 6 am and back to noon.
You DO NOT HAVE to make this huge room size solar system on your ceiling but you could simply take some objects (like coins) and have a dime be Mercury, a nickel be Venus & Earth (as they are about the same diameter) and a dime be Mars (as its smaller like Mercury) and a quarter (or better yet a half dollar is you have to of them) be Saturn & Jupiter (as they are each about 10 times the diameter of Earth) or find spheres (balls like super balls, golf balls, tennis balls and basketballs to represent the planets by size) to set up your solar system by using the chart above.  Again, simply draw a line through earth and the sun (or lay a straightedge or a straw over the coins (spheres) representing the sun and earth; and note that all planets to one side you'd see in the morning and what order they'd be in and the other side, you'd see those planets in the evening as the earth spins past midnight toward 6 am.
In the above Solar System Chart, I just made dots on a piece of scrap paper with all the planets near enough their correct positions around the Sun and drew the line through the Earth & Sun and could estimate what order I'd see each planet morning or evening and I noticed that only Mercury would be an evening planet and the other four visible planets (Venus, Mars, Jupiter, and Saturn) would be morning planets and the order that I'd see them in the sky from just looking at my diagram on my piece of scrap paper using the chart above.
On my scrape paper diagram of the solar system, I noticed Jupiter closest to the Earth/Sun line so it would be the planet closest to the sun, then Venus, then Mars and finally Saturn was furthest from the Earth/Sun line so that would be the order you'd see them in the sky; meaning just before sunrise, you'd see Saturn highest in the morning sky (as it was furthest from the Earth/Sun line, then Mars, then Venus and finally Jupiter would be closest to the eastern horizon before sunrise spoiled it all and it would be to bright to see any of the visible dark sky planets.
Then I went back to heavens-above.com and went to interactive sky and